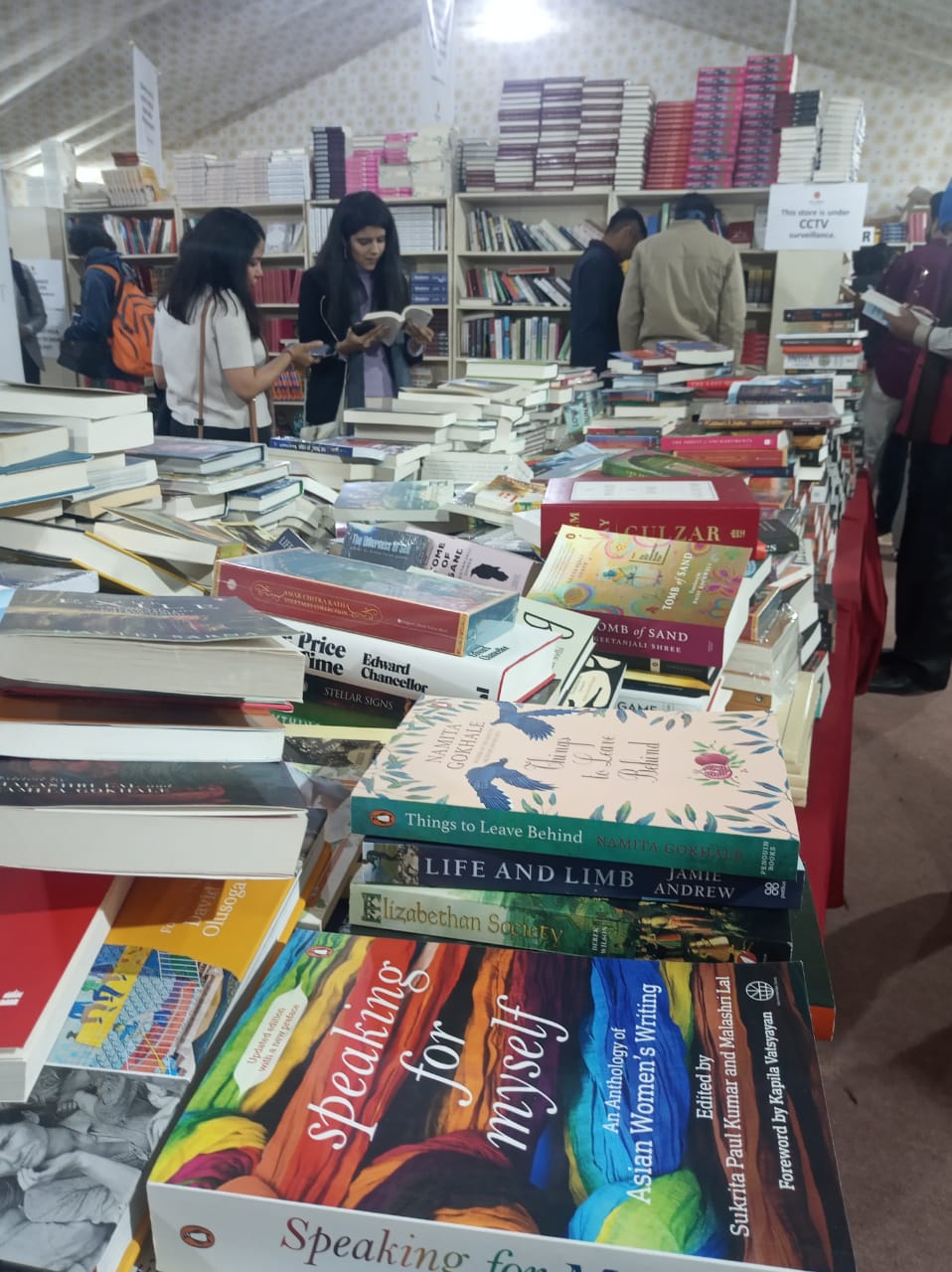 The third day of the multi-faceted and exuberant Jaipur Literature Festival began with a soulful performance by the Indian classical ensemble, The Anirudh Varma Collective. The Quintet performed Vansanthi raga, which was led by pianist, composer, and producer, Anirudh Varma. Anirudh Varma was on the keyboard, Madhur Chaudhary on the bass, Abhay Nayamally on Carnatic guitar, Sowmya Gurucharan on Carnatic voice, and Varun Rajasecharan on ghatam.

The second day of the Festival concluded with sessions featuring pioneering physician, oncologist, and author Siddhartha Mukherjee in conversation with historian and Festival Co-Director William Dalrymple. Mukherjee, while talking about cancer cells, said, “…there is a phenomenon of immune surveillance…so when you, say, weaponise a cell against cancer what you are really trying to do is make the cancer visible again to the immune system where it had previously become invisible.”

The third day of the Festival featured Booker Prize winning Srilankan author Shehan Karunatilaka in conversation with writer Nandini Nair. In the context of the novel’s inspiration from demons, bhoot-pret and rebirth, Karunatilaka said, “…and then I thought…what if I write from the ghost’s point of view and it took me to this idea of what if Sri Lanka’s dead could speak...”

International Booker Prize winner Geetanjali Shree, well-known Rajasthani and Hindi writer Nand Bhardwaj, Sahitya Akademi Award recipient and novelist Anamika, Managing Director and CEO of Bank of Baroda Sanjiv Chadha and author-translator and columnist Pushpesh Pant focused on the diversity of Hindi and the difficulty of ‘purifying’ it. They discussed how the different variants of Hindi across India get embedded in languages across the subcontinent, resulting in a Kolkata Hindi, a Mumbai Hindi, and so on. Sharing her thoughts, Shree noted, “I feel that language can never have a strict boundary, and it never should. The people who are drawing such strict boundaries are, in the name of purifying them, segregating them.”

Archaeologists David Wengrow and Rebecca Sykes talked about primitive ancestors, barbarism, human instinct, the origin of states and civilisations and their ties to the conflict between European society and indigenous discourse. In their book, authors of The Dawn of Everything, Wengrow and the late David Graeber, provide an extraordinary perspective of human history and social evolution, challenging our most fundamental assumptions to reveal a broader scope for human emancipation.

A panel discussion with academic and author Toby Walsh, CEO of ABP Network Avinash Pandey and author Anirudh Suri, in conversation with award-winning journalist Praveen Swami, focused on how technology has always seemed incomprehensible to humans and has made them question their knowledge. They also discussed the concerns regarding Artificial Intelligence, including who controls the technology, what ends it is used for and what means do we have to regulate those ends. Finally, the speakers discussed the need to promote community knowledge, while maintaining its guardrails against misinformation.

Author Deepti Kapoor in conversation with Man Booker Prize winner Marlon James talked about her latest book Age of Vice and the inspirations behind her writing. On speaking of writing a crime novel, Kapoor said, “…In order to create something larger and stranger..and unstable, I think instability is a really important word to me, instability in an unstable world that reflects the current time we’re living in…”

Internationally acclaimed artist and writer Edmund de Waal was in conversation with writer and oral historian Aanchal Malhotra. They discussed Waal’s recent works The Hare with Amber Eyes and Letters to Camondo. The first book paints a moving picture of his family’s history in Nazi-occupied Vienna and their migration to Japan due to political reasons. Inheriting his family’s exquisite collection of 264 tiny Japanese wood and ivory carvings, called netsuke, Waal decided to trace their strange history and in turn unravelled the roots of his Jewish heritage.

At the launch of award-winning poet Ranjit Hoskote’s Icelight, Hoskote was in conversation with the Creative Director of Oijo Media and co-founder of the Indian History Collective, Pragya Tiwari, reading poems from the book. During the launch, Hoskote spoke about the deepening current ecological crisis and how various species have been brought to extinction.

In another discussion, Professor of AI at UNSW Sydney Toby Walsh, President and Chief Executive of the Centre for Policy Research Yamini Aiyar, Simonyi Professor for the Public Understanding of Science and Professor of Mathematics at the University of Oxford Marcus du Sautoy and CEO of cult.fit and Founder of Myntra Mukesh Bansal, were in conversation with former diplomat Navtej Sarna. The panel discussed the role of Artificial Intelligence in the future of the world. Bansal said, “I think we are going to be living in a world where everything is going to be really smart, observing us, watching us, giving feedback, and it will be a symbiotic relationship.” In this context, Sautoy gave a demonstration of an Artificial Intelligence app which converts text to speech in his original voice and Bansal talked about virtual trial rooms and an AI gym trainer. Walsh noted, “We should always remember that there are many roots to intelligence. We are just one of those roots.”

An expert panel consisting of renowned journalists Praveen Swami, Manoj Joshi, and Nishtha Gautam were in conversation with author C Raja Mohan, to discuss In Hard Times, an important collection of essays edited by them, highlighting the significant challenges India faces today. Speaking of gender inequality, Gautam said, “Women are leading the pack so why is there resistance in getting them onboard because it’s not about gender inequality, it’s about getting talent…” They also discussed how these challenges can be addressed, particularly in light of the upheavals caused by the COVID-19 pandemic and the current world economic crisis. The panel also stated a national security strategy for difficult times, aimed at lifting India’s poor from abject poverty, was needed.

At another book launch, celebrated poet, author, music and cinema scholar Yatindra Mishra and one of India’s most respected scriptwriters, directors, and leading poets Gulzar, were in conversation with celebrated author and screenwriter Anu Singh Choudhary which focused on Mishra’s new book, Lata Mangeshkar: A Life in Music. This panel of speakers discussed the making of the book and the limitations of using English as the sole language of writing it. The decision to write the book in Hindi and then translate it to English was also informed by the different readerships that both languages attract. Speaking about his interactions with Lata Mangeshkar, Gulzar sahab said, “If there are two creative minds, they can’t be parallel lines, they have to cross each other”.

Anti-caste activist, poet, novelist, and translator Meena Kandasamy was in conversation with award-winning writer Manasi Subramaniam, discussing the two-thousand-year-old text, Tirukkural. During the session, Kandasamy also spoke about the importance of Tirukkural in Tamil culture and also about its anti-caste identity that counters the Manusmriti. The discussion was centred around the significance of female intervention in the translation of ancient texts.

Khalid Jawed‘s landmark Urdu classic, translated by the winner of the 2022 JCB Prize for Literature Baran Farooqi into English as The Paradise of Food, follows the journey of a middle class Muslim family over a span of fifty years with the kitchen as a metaphor. Jawed and Farooqi delved into this saga of food, lust, loss and vulnerabilities as they discussed the book with Creative Director of Oijo Media and co-founder of the Indian History Collective, Pragya Tiwari.

Jaipur BookMark, the Festival’s conclave on the business of publishing, had an insightful session on the ‘Mind, Body, Spirit Shelf’ that readers keep at their homes. Dr. Pariksith Singh said that the new generation is hungry for knowledge, but is crippled by its inability to share. Hence, the turn to spiritual books in present times is relevant and that the publishing industry’s approach towards it should change.

Jaipur BookMark also had key sessions focused on translations, with several experts voicing their thoughts. Mini Krishnan of Oxford University Press acknowledged the potential of translations for reviving old books and giving them wider reach. The panel conveyed that the government, private organisations, and CSR initiatives all need to come together to work towards promoting translations.

JLF ANNOUNCES A STELLAR LINE-UP FOR ITS 2023 EDITION